Heading into any new year, there is a constant drum-beating by the investment community to demand fresh strategies to catalyze portfolios when the calendar turns over to January 1. The usual suspect topics come to the fore, such as ‘Dogs of the Dow” or ‘5 New Year’s Investing Resolutions’ that tend to stray from reality as to where current capital flows are targeting.

As 2017 comes to a close, the S&P 500 will finish at or just under 2700- making for a solid year of gains of 22.2% entering the final trading day of the year. The Nasdaq has fared even better, posting a gain of 30.6% with the FAANG stocks having another banner year of performance. It should be no wonder that the month of December has seen some aggressive profit-taking in tech as fund managers perform some year-end rebalancing of portfolios to pair off winners and losers to smooth out tax efficiency.

Indeed, the major averages have put on a stellar performance for 2017. But with tax reform having passed, interest rates still at extremely attractive levels for both businesses and consumers, and stock buybacks and M&A activity remaining robust, the path of least resistance for the stock market is higher. The primary bull trend remains in tact with visibility for the next three to six months being fundamentally and technically positive for stocks.

During the month of December, the most notable developments were the bump in Treasury yields that set financials in motion for new highs and the sharp spike in the energy sector. The Fed raised short-term rates and laid out a dot plot plan for next year that includes three more rate hikes. That’s all that was needed to fuel a strong rally in financials that in my view will carry well into the first half of 2018.

WTI crude prices bumped up against $60/bbl and the energy sector got a sling-shot move off the low end of a multi-month range. We saw the major integrated oils like Chevron, Royal Dutch, BP PLC and refiners Phillips 66 and Valero vault to new 52-week highs. This trade caught most investors flatfooted, having moved from the energy patch months ago on the notion that coordinated production cuts would provide only temporary relief from what is still perceived as a glut in global crude supplies.

My current view on energy is that while the rally has been nice, the sector is overbought and due for some consolidation. I believe crude prices, while at the upper end, will stay range bound and likely to soften heading into spring save for geopolitical or accidental large-scale disruptions. Consider this week’s explosion in one of Libya’s pipelines that took 70K-100K barrels of daily production off line as an example.

Going forward into early January, the first two weeks is always a toss-up as to where short-term sentiment will dictate the market’s direction. However, I expect strong representation from leading stocks in the technology, financial, industrial and aerospace/defense sectors to lead the market higher as fourth quarter earnings season approaches by mid-month.

If this sounds familiar, it should. Momentum for these sectors will take a breather from time to time, as has been the case in December. The potential still exists for further strong gains in revenue and earnings growth, coupled with solid forward guidance, to guide fund flows into the best of breed names that I’ve been recommending and trading for most of 2017. 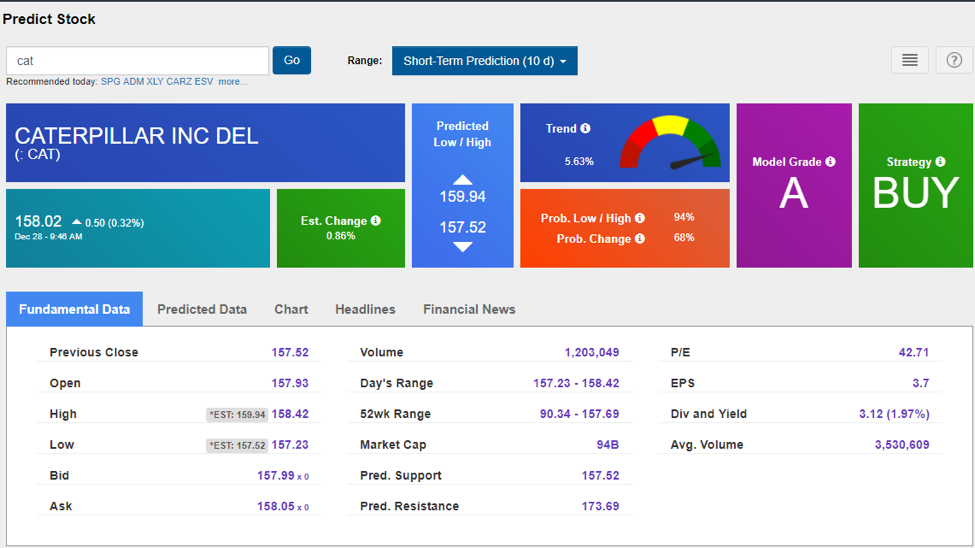 Case in point would be Caterpillar (CAT), one of the year’s best performing stocks and a clear leader in the industrial sector that is leveraged to economic expansion. From my proprietary algorithmic model, the stock carries a Model Grade of “A” and a Strategy rating of “Buy”. We also see a high Probability reading of 94% associated with a very bullish Trend indicator forecasting a near term upside move of 5.63%. What’s nice is that CAT is working for both traders and investors.

Going out six months to May 2018, the long-term price prediction has CAT targeting $177, or 12% higher than where it currently trades. The chart below- sourced from the Stock Forecast Toolbox available to Tradespoon Premium Membership subscribers- indicates we should be able to continue to benefit from CAT during the first two quarters of 2018. The high degree of confidence in this forecast makes CAT an excellent investment and trading vehicle. 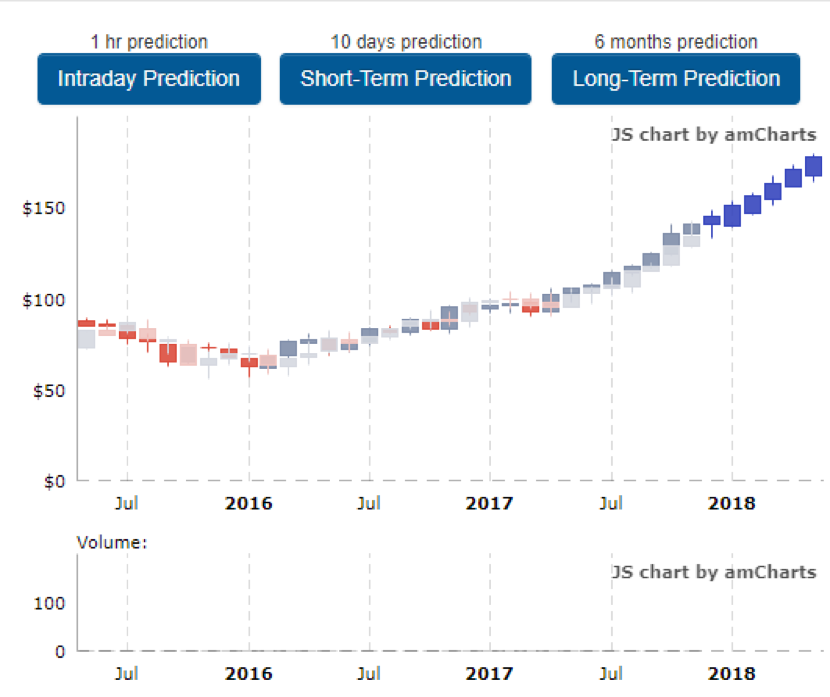 The same could be said for Boeing (BA), another big winner and consistent performer enjoying strong upward momentum. We’ve been riding the bull trend in Boeing for months, trading and booking profits for both stock and options strategies. Like Caterpillar, the company is dominant within its space and has been an institutional go-to stock, soaring 90% this year.

The aerospace giant has benefited greatly as the global economy kicked into a higher gear, increasing demand for airplanes. The U.S. economy continued to grow, while major regions like Europe and Japan did better than they had in recent years. My forecast model has Boeing shares challenging $350 six months from now, as the chart below indicates. That implies almost 20% upside from current levels. 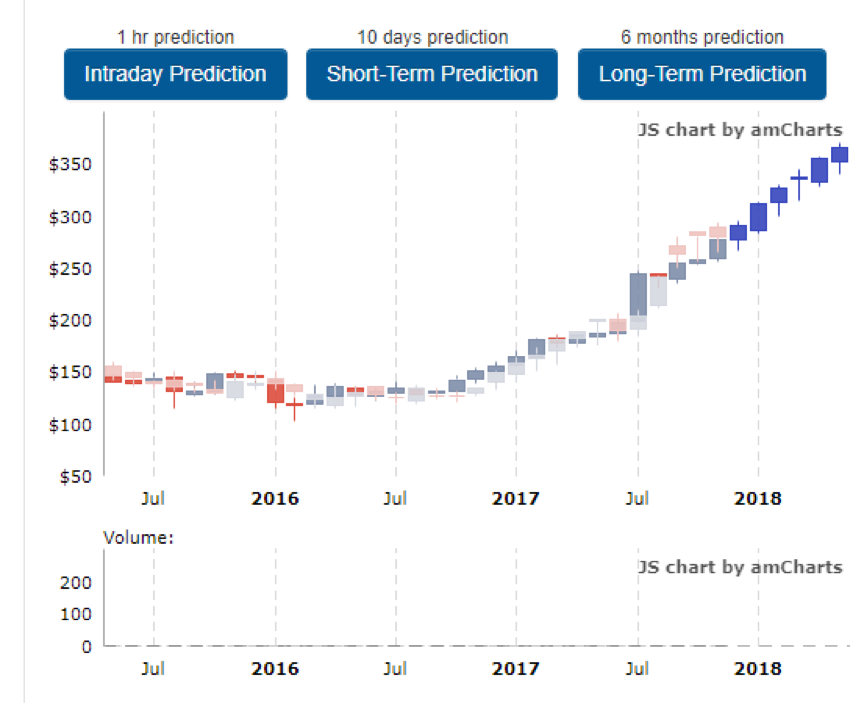 Looking at other notable sector moves, my take on the rally in materials and commodities is one of a cyclical bull market within a long-term secular bearish downtrend. Rallies should be sold into when technical indicators are flashing overbought readings, married with a measure of caution on buying future pull-backs.

Gold prices have been rallying of late, challenging $1300/troy oz., with the US dollar trading lower as the Federal deficit is projected to be higher this year due to lower anticipated tax receipts due to the new 21% corporate rate. It’s hard to ascertain anything larger from this development, as the rally in gold might be in reaction to the volatility within the Bitcoin space.

Speaking of Bitcoin and the whole cryptocurrency revolution, I’m a believer in the transformational change taking place regarding blockchain technology. Currently, the technology is primarily used to verify transactions, within digital currencies though it is possible to digitize, code and insert practically any document into the blockchain. As to the various currencies like Bitcoin, Bitcoin Cash, Ethereum, Litecoin and the rest, expect to see 30%-50% swings in price with the broad direction being higher simply out of more buyers than sellers in the marketplace; at least for now.

Other blockchain protocol platforms like Ripple are a new breed of open payment network providers that are seeing rapid adoption by credit card companies and financial organizations focused on seamless transactions. Ripple provides one frictionless experience to send money globally using the power of blockchain. Hence, Ripple and other blockchain tech companies might be the larger and more investible theme within the broader crypto-asset revolution that was clearly the biggest story of 2017.

As to whether one buys into the crypto-asset space as a store of value or as it takes on the role of global money, it’s still too early to know the implications for these various currencies as the rules, regulations and restrictions are still being defined. My advice is to not allocate more than 1%-2% of one’s portfolio to the Bitcoin et al exposure.

Looking ahead, with rates expected to rise, financials should lead early in 2018 with information technology regaining its upward momentum and its rightful place as market leader. Industrial themes will continue and increased defense spending supports more gains for that sector as well.

It is my view that Emerging markets as represented by the iShares MSCI EAFE ETF (EFA) and iShares MSCI Emerging Markets (EEM) and European markets will follow the direction of the fortunes of the U.S. market.  We will trade these liquid ETFs and others as opportunities permit, but there are of plenty of opportunities offered by blue-chip multi-national stocks that conform well to our proprietary forecasting models.

Finally, there is no magic number I’m looking for the S&P to trade at by this time next year. A simple 12% move up takes the S&P to 3000, a level that I find very achievable. I take it one day at a time and what looks great today might turn sour tomorrow. We do the best we can with the tools we have and I’d like to think I have the sharpest tools available to self-directed traders and investors offered anywhere in the marketplace today.

Until next week, have a Happy New Year.

Please share this Tradespoon Market Commentary with your friends.

Our simple 3 step approach has resulted in an average return of almost 20% per trade!